This is Everyday Chastity, my blog and resource for all things related to Male Chastity, FLR & more!

Everyday Chastity is my personal blog, in which I will be looking to document my prior chastity experiences since I began in 2015, how I got my very vanilla wife on board, and how it expanded from there.  It’ll be no-holds barred, realistic descriptions of the successes, failures and everything in-between.  I’ll go into how I had to distinguish the fantasy from reality, tempering expectations, looking at how it’s affected me mentally and psychologically.  There will be essays on some aspects, as well as my personal entries.  Also to be added as regular content is some reviews/thoughts on devices (I don’t have tons of cash so it’ll be quite limited to what I’ve owned/own), memes and captions I find or create myself, and much more.

What is Male Chastity?

If you weren’t curious about male chastity, I would guess you would not be reading this!  But in all seriousness, male chastity is essentially the denial of sexual pleasure for a male.  This can be done ‘honourably’ by simply not masturbating, but in my experience this is pretty hard to do consistently.  Some people can, and more power to them.  Often people will use a chastity device, also known as a ‘cage’ or ‘tube’.  It’s a bit of a rabbit-hole because finding the right size and fit is a journey in and of itself.  There are also ‘belts’ which are more secure (for some) but my body shape means I’d probably be able to squeeze out of it.

The device is locked on via a padlock or internal locking mechanism, and the denial begins.  How long you last could be determined by yourself (called ‘self-locking’), an app (such as Chaster), online key holders (who may also use apps to control the lockee) or an actual partner who is either available or you live with.  In my case, my wife is my keyholder, and she determines if/when I get let out (‘released’) or even if I can have an orgasm in any sense (bizarrely it is also often referred to as ‘release’, but cum, orgasm, finish, etc can be valid substitutes).

I’ll be posting my experiences, looking into male chastity as a whole and it’s impacts on intimacy, relationships, the psychological, sexual aspects and more.

What about this Female-Led Relationship stuff?  What’s that all about?

Females are very good at running homes.  Ergo, they are awesome at running marriages too.  I am in an FLR with my wife, and it’s been growing and improving steadily.  With this particular topic, I’ll be looking at resources, guides, experiences we’ve had, all sorts of discussion on the various aspects of FLR and how it can be practiced at many different levels.

There are different expressions of the FLR as there are people’s expression of how they practice chastity.  I’ll really only be discussing my own experiences, and relating other resources that might be beneficial to anyone interested in pursuing this idea further.  (Hint, I think it’s really worth exploring).

*That’s not to say that sometimes my key holding wife will engage in a more playful spanking – usually to ‘test drive’ a paddle or other implement, or maybe as part of another game – say I lose a board game, then the number of points I lose by is how many spanks I get.  That sort of thing.

It’s not really as sexy as the illustration suggests.  It’s humiliating, degrading, and for me, it’s rather effective overall.  My punishments range from standing in the corner, being spanked, domestic duties being done naked, increased chastity denial, apology letters, and a few more that escape my mind right now.  It’s all to bring about positive change in the chaste male (when being practised in an FLR context), to hopefully see the male becoming more subservient and worshipful of the woman who controls him. 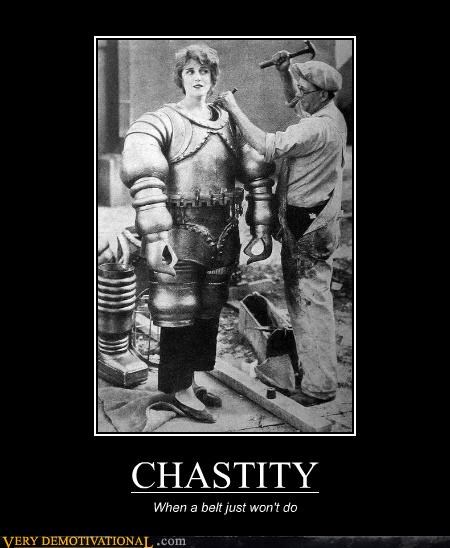 One of the early things I discovered that has been around probably since the early days of the growth in male chastity is the keyholder caption.  Usually a seductive or appropriate image with some simple text overlaid to emphasise a point.  Often it’s usually centred around a specific fantasy element, or even for some practitioners, actual elements.  I’m looking to create my own captions based on my particular chastity lifestyle, so these will be posted in due time.  Any that I see around on the internet can be posted here (with attribution where known).

I’ll also post memes, book reviews, thoughts on other blogger’s articles, etc.  Just a smorgasbord of male chastity content for you to tuck into!

My Week In Chastity – Episode 3

My Week In Chastity – Episode 4