A musing on the nature of chastity, burning out, recovering and the continual ongoing desire for kink.

So unfortunately I went radio silent for some time. Some things happened, and some other things didn’t happen which all compounded my mental mindset at the time to conspire against me.  I just simply became overwhelmed.

Obviously, based on other posts, you’ll know I have ADHD, and this isn’t ideal when it comes to long-term commitments lol.  I struggle to maintain habits over long periods, need a constant stream of “fresh” things.  I can rotate the things I commit to, which is why I consider chastity inescapable (which I write about later).

So the appeal would dwindle a bit because of this.  It didn’t take much, but it did affect things.

One of the biggest problems I faced wasn’t even of my own making, but was something I didn’t open up about, and is something I’ve been planning to open up about anyway.  That is the reluctance of my wife to take absolute charge.  Sure, at times she was in charge, but rather than doing that on her own absolute terms, she would often wait for me to initiate things.  It’s really complicated to write and explain however.

We had learned a lot of new things, and she really enjoyed them but seemed to rely on my own explaining things in a way to adapt on her terms.  For example, my love of bondage.  I explained that I liked this, we got some things for it, and she did it, being able to find her own enjoyment in it.  But she would never initiate it even after that threshold had been reached.  It would always be down to my own hinting more than anything.

Now this might sound like “topping from the bottom”, but I really saw it as dropping a seed of interest to allow her to interpret that how she liked.

The time away was good for myself.  Helping me to overcome the somewhat bitter feelings that had come up, learning to put those into perspective and develop a mindset to make the progress towards a locked lifestyle once more.

One of the harder facets to deal with was a sense of jealousy.  When I see the amazing scenes and photography of others in situations I long for (such as those in the little gallery below), yet cannot attain them, it’s bloody hard to process and put into perspective.  Closing off those desires wasn’t the right way to deal with it, and for a while just being away from the sources of them helped to regain perspective.  But it’s something I still long for, that sense of confinement, restriction, control by someone else.  These are hard things to bring to a vanilla relationship even at the best of times.

The pictures above demonstrate some of the things I desire – but the practicalities of working these out with a vanilla wife are difficult.  This was the thing I had to ‘work out’ – how to go about putting a sense of proper scale of time to guide and explain my desires, allowing her space to work these out without rushing, as well as dealing with my own ADHD-fuelled “all or nothing” mentality it creates.

Hopefully I’ve found that perspective.  Taking the time away helped to stop fuelling a deeper frustration that kink desires were not there in our playtimes, that the initiative may always have to be mine – and I’ve become more okay with that. Becoming the ‘ideas man’ and allowing her to interpret them as she wanted seemed to work well, despite my own deeper seated desire to have her totally surprise me from the very start.

I’ve learned some things are worth pursuing deeper, some things being left – I’m not going into detail here, but they are things we have tried.  Some could be adapted to a more playful nature, others to be left behind, and others to pursue more and maybe try to expand upon them.

And hopefully I can re-establish the connection we found in our little kink adventures once more.  My hiatus kind of made things quiet again for both of us.  Again this makes me realise that I’m the ‘leader’ in this sense, and having to put the idea of me being submissive into my wife’s mindset to prompt her as if to say “Hey, you want to have some fun?  Then I’m up for being your toy for the evening, here’s a couple of ideas…”  Not ideal, but once the seed is planted, she’s usually up for it.

The other aspect is dealing with menopause.  My wife had a complete hysterectomy just prior to our marriage, and it’s still affecting her to this day.  Sexual desire is almost non-existent, which is a bummer.  However, we have discovered a mischievous side to her, so it’s exploiting that – her enjoyment in seeing my struggle, frustration, and being able to share that side of things.  She understands her lack of libido, but places more delight in seeing my sexual frustration knowing I have more libido.

This probably explains the lack of pure initiative taken by her – she loves the dominance, can create her own ideas but doesn’t apply it when she feels like it, most probably because there’s no drive to.  So maybe prompting will have to be a part of things for some time.

These things take time to work out.  It takes time to be open about, time to explain, time to accept and time to practice the things we desire.

Chastity was always on my mind however after a certain period of being away.  For the longest time I wasn’t prepared to do anything about it, save for keeping it in my mind, letting it fester, sitting there and slowly but steadily growing.  It’s not the first time I’ve gone through this process either.

Since 2015 I’ve been through the up and down many times.  Each time I’ve progressed further, or deeper, or longer – and unfortunately each time thinking ‘this is really my life now’.  It hasn’t been to the extent I thought at the time.

That said, each time has been more enjoyable, even in the delicious sexual frustration.  It’s also reinforced chastity as a norm for me and my wife, as each time we have developed closer together through this.  She has settled into roles and understanding more each time.  The last time earlier this year was the best, barring the issues mentioned above.

I may at times be unlocked (for whatever reasons), free in my physical self, yet I cannot ever seem to escape chastity as a concept, a mindset, a desire at all.  It’s inescapable in that sense.

I’m back.  Yes, for the meantime I’m self-locking.  It’s more just because I’m acclimating to wearing my cage again.  I’ve gone straight back to my beloved Steelheart over the BadassWorkroom, but this time I’ve opted to use the PA loop which I’ve disagreed with in the past.  For some reason it’s working fine this time which is quite puzzling.  So far I’ve managed around 72 hours, hoping to set up for longer, but really need to do something about the hair again… 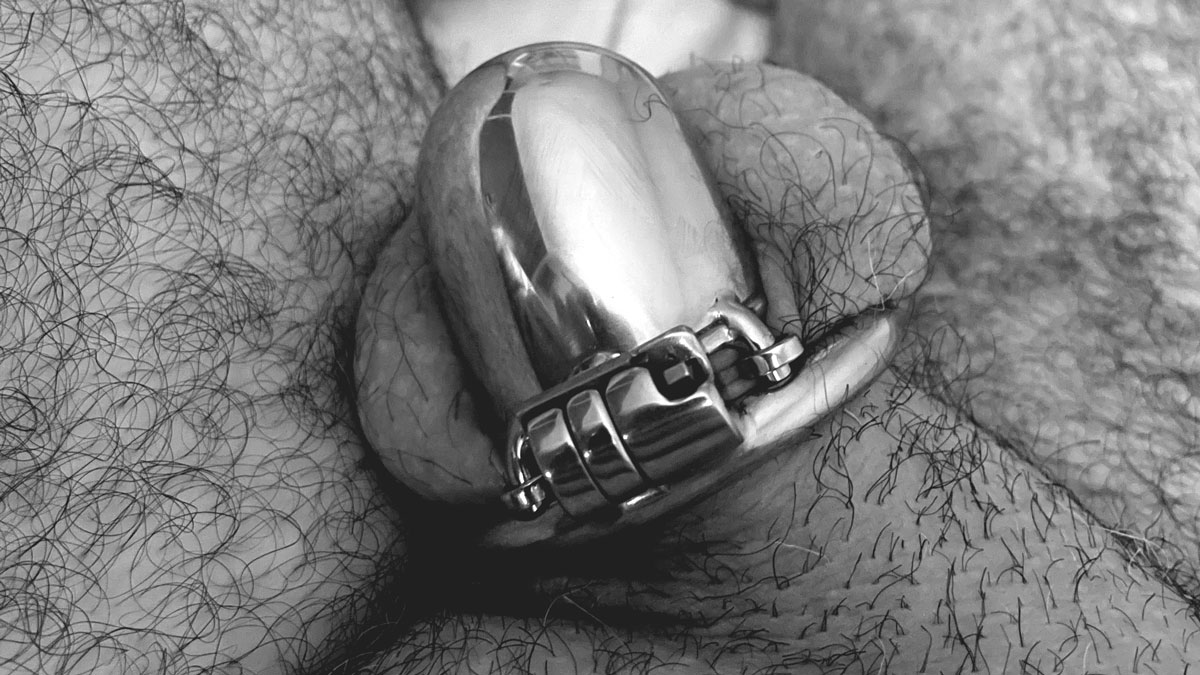 Now, where are my tweezers 😱?

My Week In Chastity – Episode 8