I’m deciding to create a regular series of “episodes” where I just ramble about my locked state.

This last week has been a big change in a lot of things. Firstly, I launched this website, mostly to document things like this and eventually get round to doing some other writings on here.  I’ve already added a few posts, especially one in which I considered the nature of a question my keyholding wife asked me:

“Do you want to go back in, to be locked again?”

It was an interesting question, one that I wrote about in some depth, considering the nature of how chastity is a paradox of choice – on the one had, we desire freedom (and an orgasm!), on the other we want to continue to ‘play the game’.  Ultimately I decided to continue, as if I had a choice, ha!  It lead on to musings on the nature of submission to our key holders, and also to fighting against the urges and desires we have for want of another experience.

I ordered a new chastity cage from a relatively unknown (to me at least) maker be the name of Badassworkroom.  I’ve gone for a good option which might alleviate the issues I had with attaching my Prince Albert piercing into my Steelheart (namely, that the loop they produce takes up space and rubs on my penis).  Waiting is a nuisance, especially in this day of Prime next day delivery, but then we have to be forced into patience by our key holders as we await the next release or orgasm…  So in this post I give the details of what I’ve ordered, muse on the nature of patience (or impatience) in chastity, and how I hope the new cage is an improvement for longer wear than my beloved Steelheart.

Yeah, I got spanked again…

Still struggling with our current “project” in our FLR/WLM.  I’ve been working hard on my attitude towards certain things I find frustrating.  I haven’t been doing so well, I thought.  My wife, however sees things differently.  She’s seen good progress, continued willingness to change, but I still needed the “attitude adjustment” this week.  Twice.

Her technique has improved, we even talked about getting different implements for discipline sessions like this.    But I feel that she’s lacking that final push from just ‘hitting’ the spot, to actually being full, proper, domestic discipline.  I know she’s capable of it, I’ve had one such spanking and it was damn effective.  The kind I really, really wanted it to stop.

She’s come to an understanding that she needs to push harder.  It’s not hurting me in the sense of being malicious, but really it’s a corrective process that she knows works on me.  She told me she will be working on it to the point where I will “know about it every time I sit down for a week”.

On the one hand, I can’t wait for this to happen.  On the other hand, I really don’t want to push my luck lol.

So I had two sessions for attitude issues, and hopefully from my feedback (in which I aim to be as honest with my wife as I can), and relying on her observations of how discipline helps me be a better husband, she will continue to improve in her corrective processes.  Personally I don’t feel that the punishment sessions did much to correct things in the longer term, but I really am quite focused on improvement this coming week.  I have already told her this, and we are still moving forward with a domestic discipline relationship as part of our FLR/WLM.

My wife tied me to the bed to tease me.  The last time she tried some light bondage on me (something I’ve desired for YEARS), she said she felt uncomfortable.  This time, she had no such qualms.  She was quite eager to tie me down to each corner, and then use the wand on me in various ways.  Needless to say it was something of a dream come true, although I was still not allowed to cum.  Not even close.  I begged after I could endure no more and the session was over.  I would love to repeat it again, and I’m sure we will at some point soon.

Sure, it was restraints I could have gotten out of given enough effort, but she did warn me that if I did, it would be over.  She didn’t allow me to squirm, and when I did I got firm hand swats on the sides of the thighs.  Ow!

It was a good time, I felt really close to her after this.  I love her for pushing her own envelope, as well as giving me a privileged teasing session, but no orgasm.  I thanked her repeatedly and we should be doing this again soon at some point.

Also, during one day, my wife decided that I should wear a dog collar at home.  We had one spare (it is our business looking after dogs anyway), and she promptly put it on me.  Completely oblivious to the significance of it, she wondered why I was blown away, almost emotional.  I explained.  Collaring is a sign of ownership.  She seemed to understand, and half-jokingly said “Well, I own your dick, now I own you.”.

It was a powerful, humbling moment for me personally.  I loved it.  It felt like home.  It only lasted the day as we are playing through some ‘Submissive Cards’ I purchased from Etsy.  I’d printed a bunch of the most suitable (I don’t have breasts, so a “Braless Day” doesn’t really work for me as the sub lol), and she’s been using them occasionally.

I really, really hope collars as an idea/topic come up again.  When we talk in our next review session, I’ll bring up the idea as a way to put me into a submissive mindset pretty much immediately.  Because it did.  I felt even more bonded to my wife than her just being my wife and life partner – she owned me, and I trusted her in that period to use/guide/love/care for me in whatever way she saw fit.  I would be absolutely over the moon should I be able to get her to buy one for use on me.

I’ve had a few moments this week as I head towards a new record in consecutive days locked that my cage became practically invisible at times.

Now I know some readers would say “But it should feel invisible” – to which I say tosh. I’ve got the best part of 230gm of stainless steel attached to my dick.  My job involves a lot of walking.  I ride a motorbike.  I work 7 days a week, 365 days a year (give or take).  There are conditions, times, events in my normal daily routine I can really feel this thing attached to me.  My ballsack going so tight in the colder weather it hurts.

It’s a well-fitted cage, nothing a little more ring-cage gap wouldn’t fix (as I mentioned in my new cage post).  It’s comfortable most of the time.  I’ve learned tricks about keeping things warm in cold weather, protecting it when on the motorbike (microfibre cloth folded a few times gives great padding and reduces vibration sores).  For the most part, it’s great.  So when I get a moment where I simply don’t feel the cage (or my cock for that matter), it’s an amazing moment.  I feel momentarily free of the chastity device, before descending into panic and feeling to know it’s still there.

For those counting I’ve been locked 33 days so far – obviously I include days as locked where my wife unlocked me for toying around with, as it’s usually for a few hours max, and I include my hygiene routines in there too.

I spent a huge amount of time while back (probably about a fortnight ago now), plucking hairs via tweezers from my pubic area.  Hours.  Eight hours sat practically doubled over, hunched, with a magnifying lens headset and a pair of really good tweezers getting nearly every pubic hair I could spot.  It was a painful exercise – no, north pulling of the hairs, although a few did decide to really bleed, but the muscles in my neck hurt for a few days afterwards.

But the end result was a massive improvement in comfort.  The base ring stopped chafing as much as before, the skin tears I suffered with for years cleared up, and overall it was just magical.

A few hairs have already sprung up again, as I am blessed/cursed with rapid hair growth.  One good thing in tacking the new hairs is that they are finer and much easier to tweeze out, which means my longer term plan of getting an epilator to work on the rogue pubic hairs will be immensely less daunting.  Can’t wait to have the budget for the epilator.  My wife thinks I should just continue to tweeze for another month or so, so that’s where I am at with the hair front.

What’s Coming Up Next?

I’ve got some more posts planned – I am currently working on some interesting topics on the nature of submissiveness.  In particularly where submissive personalities live within a 24/7 D/s relationship.  I am married in a Wife-Led Marriage, and my wife has begun to become more dominant.  I love this, and it’s also a challenging time for me as the submissive.  So I’m writing a series of posts about that, hopefully the first one will be out during the week.

There’s been a lot of thought in my mind about the nature of ‘permanent’ chastity, especially since I chanced upon an article (I’ve now lost) in which there was the musing of what is really “permanent”?  I’m curious by this as a concept because I’m currently in an indefinite period of chastity, in as much as I agreed that my wife controls my releases, orgasms and everything associated.  I’m unlocked frequently for her to play with, usually in tease and denial sessions owing to medical complications. So I’m planning to write a little about my thoughts on what “Permanent” chastity is or should be, and some common misconceptions about it.

I also intend to write more about how our Female-Led Relationship started, how it’s evolving and more.

Have a great rest of the week, and stay locked! 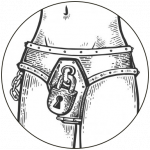 My Week In Chastity – Episode 3